Skip to content
HomeTowers Students Set Out To Disprove Inferiority 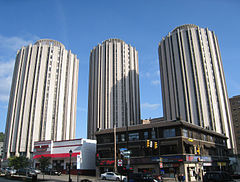 PITTSBURGH, PA—It’s quite apparent that Pitt makes it a point to provide its students with a wealth of fun activities and amenities to help engage new students and to help them make the transition from living at home to dorm life. Unfortunately, the majority of these luxuries are only provided to a select few living in Nordenberg, whilst other freshman dorms are left out.

A few weeks ago, a group of freshmen living in Tower A decided to take the already first-rate experience of living in Towers to new heights by filling an inflatable pool with water in their hallway in front of the elevators. One of the students involved was quoted as saying “Fuck you Nordenberg, do you have a pool? Cause we have a pool.”

Not to be outdone, a group of Tower B denizens responded by setting up their own pool on their floor, complete with beach sand, a volleyball net, and even a bonfire. Even though it was BYOB, the resulting beach party was an epic event with great music and s’mores. When asked what inspired them to throw such a rager in Towers, Ethan Tomlinson of Tower B stated “We weren’t really aiming to one up Tower A, we just wanted to show that we’re better than Nordenberg, because fuck them.”

The RAs were none too pleased about these negligent and potentially destructive antics, but all of them agreed to let it pass because “At least it’s better than anything those assholes over in Nordenberg have, seriously fuck those guys”.

Proposed future recreations to show up Nordenberg include the installation of a motorbike circuit, an ice skating rink, and a disco dancefloor.